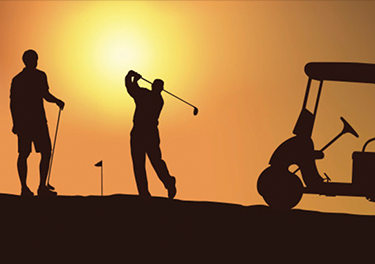 GOLF may be just a game for many, but for Jarrod Lyle it means much more.

Whether we wear pink, yellow or any color, no matter

what our cancer story is, we are all part of the same fight for ourselves and those we care about. I want to believe we share the same goal: to end every form of cancer and eliminate pain from our loved ones.

At the October 2014 Frys.com PGA Golf tournament in Napa, California, I spotted a golfer wearing a yellow floppy hat approaching the 17th hole. This golfer, along with his followers, was wearing yellow, and they stood out. My curiosity was peeked and wanted to know who they were and why they were wearing yellow. The brief story I heard was 33-year-old Jarrod Lyle, Australian PGA professional golfer, is a two-time leukemia fighter and survivor, Leuk the yellow duck is his mascot, and is back on tour to achieve his PGA status again. This story tugged at my heart because leukemia is a form of cancer that tried to attack my own father’s life a few years ago, but together our family fought, won and happy to say he is cancer free and living life to his fullest.

Drawn to know about Jarrod’s journey, I searched for him after his round of golf to ask for an interview and possibly compare war stories. I connected that day in person and then by phone with Jarrod and his wife Briony after the Shriners golf tournament in Las Vegas and before they headed to Australia for more tournaments and the holidays. Their powerful story of love, strength and persistence inspires not only me, but others to never give up.

When Jarrod Lyle was 17 years old and diagnosed with acute myeloid leukemia, he recalled just being run down and thought it was just the flu. Up to that point in his life, whenever he heard of someone having cancer he associated it with death. That two-hour drive to the hospital for his first fight was a very quiet ride; he didn’t know what to think and didn’t speak at all. He said all he could think about was how to get rid of it, he didn’t want to die and he wanted to play more golf.

His attitude and willingness to fight gave him the strength he needed. He said I never gave up and when asked what words of inspiration he can give to children who are fighting leukemia, he said, “Kids still need to be kids and play and should not be treated differently. They want to feel normal and keeping them occupied will help them and the parents too.” His positive attitude kept him on track. “There were many bad days but I knew that would happen before the better days could come, so I just sat back and remained positive.” I asked, what is the most important advice he wants to share with everyone who is fighting cancer? He replied,

“It is simple. Three words: Never give up!”

He fought that first round of cancer but received another challenge in 2012 when he got the call from his doctor and heard the words: The cancer is back. This time he knew what that meant and the fight he had in front of him. This time, the strength that fueled him was the birth of his daughter, loving wife, and the desire to be around to be the best husband and father. Golf was most important to him for a long time, but he knows now, that family and health is most important and taking it day by day.

When asked about his golfing career and how this has affected his game of golf, he said that he would like to golf for a living and will do the best he can, and when there comes a time he can’t compete, he will reassess and it will be okay because he has the loving support of his wife and daughter. When asked how beating cancer twice defines him, he wasn’t sure. “I have been known as a golfer and now I seem to be known as the twice cancer survivor… and golfer. It’s okay to have that tag, and sometimes it is hard to get a grasp that I may be inspiring or helping people with my story.” It doesn’t affect his golf game when people talk about cancer on the course nor does it take him off track.

“If I can help people, I will,” he announced.

Not only is Jarrod the survivor in this fight, his wife Briony survived and supported her husband and she kept a positive “never give up” attitude as well. She was 8.5 months pregnant when Jarrod was diagnosed and his doctors wanted to immediately begin his chemotherapy treatment. It took days for Briony to convince her doctor to induce labor and Jarrod’s doctors to hold on until her daughter was born. If she had waited, Jarrod would not be able to be at the birth or hold the baby because of the toxin exposure produced by chemotherapy. She knew that Jarrod needed to be there to see Lusi born and draw in the strength he needed to get him through and to the other side of this fight. Briony’s persistence allowed Jarrod to be at the birth and hold little Lusi for many hours before his treatment began. Briony said that he would not let anyone else hold her and was a very special time for all of them.

Then came the cancer fight, and Briony put her shield on and their newborn was the distraction they both needed to get them through this. Had they not been blessed with this little angel, who knows what the outcome would have been? Briony believes that their daughter is the silver lining in this fight. Conceiving a child was the first blessing, because of Jarrod’s chemo intake; doctors suggested that he may be sterile. So the fact that they became pregnant came as a complete surprise and the timing of their first child came at the right time for Jarrod.

As Briony looks back, she didn’t have as much quality time with her newborn as they began the fight, but as time went on, it was the distraction and care giving of their baby that kept them both in the present and choose not to ponder on the day to day negative stuff of reading charts, researching, the what ifs, and dissecting lab reports. She said that we didn’t ignore the information; we just didn’t let it control us. Keeping all those medical reports aside and just focusing on the “what’s next,” kept her from being stressed and overwhelmed, and she is glad this is how she approached this fight, and having a bouncy little baby was just the right medicine.

When Lusi was around 1 year old, Briony shared that her emotional strength weakened and as she was able to finally take off her shield and breath in a sigh of relief, she also began feeling the loss of experiencing the birth of her child and her first year of life in a “normal way” and she knows she can’t get that year back, and is grateful for her own strength that helped Jarrod get through, fight and beat the cancer. Lusi is now 2.5 years old and she is the light in both their worlds. They see a new life through her eyes as she spends her favorite time on planting acorns that she finds at the many golf courses she spends time at.

Jarrod Lyle is a professional golfer, father, husband, friend, son, fighter, cancer survivor, and most importantly he is a man who sheds a tear easily, shares himself and his story so honestly and freely in the hope of helping another person. Jarrod, Briony, and Lusi Lyle’s story touches others, and it may not just be about GOLF the sport, but GOLF: Game of Leukemia Fight.

Jarrod and his wife Briony have documented their journey in their own words. They both share and support others by bringing awareness through their website for all to read and view. Take a visit: www.JarrodLylegolf.com